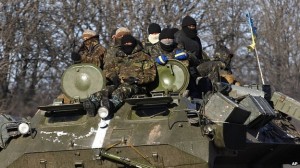 Fierce fighting is reported inside the Ukrainian town of Debaltseve despite a ceasefire deal which was agreed last week. Rebels say they are in control of most of Debaltseve, a transport hub, but the government says it is still in control. BBC has more:

International observers tasked with monitoring the ceasefire have been unable to enter the town.

Earlier, both sides failed to begin withdrawing heavy weapons, despite a Monday deadline agreed in the truce.

The two sides were given until two days after the latest ceasefire came into effect to start the pullout.

A spokesman for the self-proclaimed Donetsk People’s Republic told Russian news agency Interfax that the police station in Debaltseve had been taken as well as the railway station.

He said most of the city was under the control of the separatists and that a mopping-up operation was continuing.

The rebels also said that dozens of Ukrainian troops in Debaltseve had surrendered and others had been killed.