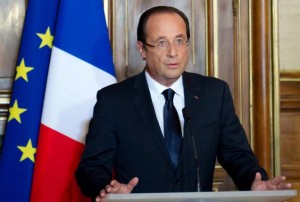 A peace plan which was drawn up by France and Germany is “one of the last chances” to end the conflict in east Ukraine, French leader Francois Hollande has said. BBC has more:

German Chancellor Angela Merkel said it was unclear if the plan would succeed, but it was “definitely worth trying”. Mr Hollande said the plan would include a demilitarised zone of 50-70km (31-44 miles) around the current front line. The leaders are attempting to end the fighting in Ukraine between government troops and pro-Russia rebels. Russia is accused of arming pro-Russian separatists in eastern Ukraine – claims it denies.

Mr Hollande and Mrs Merkel are due to discuss the peace plan with Russian President Vladimir Putin and Ukrainian leader Petro Poroshenko by telephone on Sunday.

Few details have emerged, but the plan is thought to be an attempt to revive a failed ceasefire deal signed in Minsk, in Belarus, in September. Since then, the rebels have seized more ground, raising alarm in Kiev and among Ukraine’s backers.

The UN says fighting has left nearly 5,400 people dead since April, when the rebels seized a big swathe of the Luhansk and Donetsk regions following Russia’s annexation of Crimea.