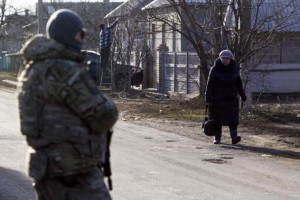 A long-awaited truce appeared seems to be hold at last in east Ukraine on Wednesday as pro-Russian rebels pulled artillery from the front, though the news did nothing to halt a currency collapse that forced the central bank to ban most trading. Reuters report:

The Ukrainian military said it was still too early for it to begin withdrawing its own heavy guns. But its acknowledgement that most of the front was quiet suggests it too could push ahead with implementing a truce that had appeared stillborn when the rebels ignored it to launch a major advance last week.

The cautious good news from the front has come amid dire economic consequences for a country teetering on bankruptcy.

With the hryvnia currency in free fall this week as investors pull out cash, the central bank tried to call a halt on Wednesday by banning banks from buying foreign currency on behalf of their clients for the rest of this week.

Although banks could still trade with each other, by mid-morning there were no registered trades at any rate, leaving the currency in limbo. The previous day, the central bank rate based on reported trades had fallen 11 percent against the dollar.