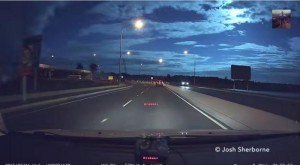 A New Zealand man’s dashboard camera captured the an amazing moment an apparent exploding meteor lit up the night sky over the North Island. UPI has more:

Josh Sherbourne said he was on his way to the gym in Tauranga on Wednesday night when his dashboard camera captured the bright light in the sky that witnesses said was accompanied by a sonic boom. The phenomenon was reported by residents of Tauranga, Matata, Wellington, Auckland, Whitianga and other North Island areas.

Auckland Civil Defense & Emergency Management services tweeted the cause of the lights and sound was “most likely” a meteor. Noel Munford of the Palmerston North Astronomical Society told Newstalk ZB he is “absolutely convinced” the object was a bolide, a meteor exploding in the atmosphere, or else it was merely the earth warming up “for some sort of interplanetary cricket match.”

Munford said meteor material was found Thursday. “There is tons of it, and it ranges in size from sand grained, right up to rocks,” he said. “This thing would have been a cricket ball-sized rock that probably broke off from some impact collision between a couple of asteroids a few million years ago and it has been wandering around the solar system until it happened to put on its display for people over New Zealand last night.”