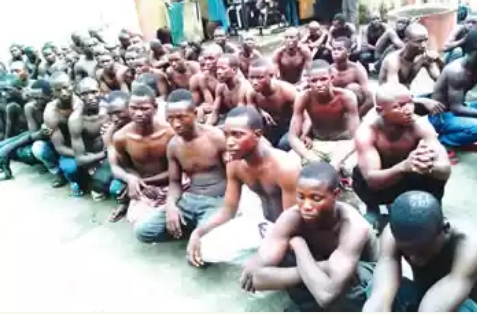 Shuaib added that he had spent eight years in Nigeria, but could not acquire valid documents before he was arrested by officials of the Nigeria Immigration Service, Lagos State Command.

The 34-year-old was among 82 illegal immigrants paraded on Wednesday at the command’s office in Alagbon, Lagos.

The suspects were said to have been arrested at different parts of the Lagos Island area after an intelligence report.

Shuaib was arrested along with a relative, Idris, who had spent barely one year in the country when he was caught.

Shuaib, who spoke in pidgin, said, “I have been here for about eight years now. I work as a loader and make between N1, 000 and N1, 500 a day. I use the money I make to feed my family in the Niger Republic. I am married and have two children and they are in Niger.

“I travel home every six or eight months. The people at the border see many of us when we come in. Sometimes, they collect N300 and other times, we give them N500 before we pass.”

His brother, Idris, also explained that he came into the country to make money which he usually sent home to his family of three.

Another suspect, Alimaru Saliade, told PUNCH Metro that he sneaked into the country by mixing up with cows being transported into Nigeria.

Saliade, who claimed not to know his age, said in pidgin, “I followed cows to Lagos. I have been here for four years now and I have not been able to get my documents because I don’t have money.”

For Yaya Ibrahim, coming to Lagos was to avoid being idle in the village.

“I was in my village and was not doing anything. So, my uncle asked me to come and work in Lagos and that was how I found myself here. My parents live in Ghana but we are from Niger,” he said.

He said while some of the suspects were caught around banks’ branches, others were found sleeping under the bridge and “constituting nuisance to residents”.

He said, “We have a surveillance team that keeps a tab on illegal immigrants in the state. When our men went out, they got them in all manner of places. Some were caught around banks, others were found sleeping under benches. Even fuel stations were not spared.

“In the Idumota area of the state for instance, we found that they have a room where they sleep. It is not clear whether they rented the apartment or somebody gave them the place. We introduced ourselves and arrested them; they never resisted.”

The Comptroller of the state’s command, Mrs. Justina Ahmadu, commended the officials, adding that the service would intensify efforts to rid the state of anything that could constitute security risk.

She waved away Shuaib’s claim, saying most of the illegal immigrants came into the country through unauthorised routes because they did not have valid documents that could guarantee their stay.

“This is a continuous exercise and we will continue to weed out illegal immigrants from the state. Anyone without a valid passport or resident’s card will be sent packing.

“We appeal to Lagosians to cooperate with us during our operations by not harbouring any illegal immigrant or fighting our men. This is the only way they can assist us to discharge our functions efficiently,” she said.