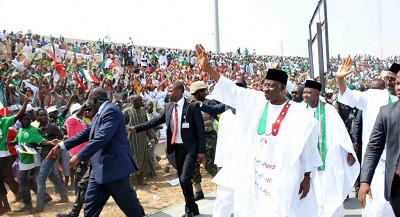 The Arewa community in the South West on Friday threw their weight behind the presidential ambition of Dr. Goodluck Jonathan for a second term in office.

The endorsement was conveyed to President Jonathan at an interactive meeting he held with the community at the State House Marina, Lagos.

The Sarkin Hausawa and Chairman, Arewa council of Chiefs in Lagos and Ogun, Alhaji Sani Kabiru, said that the endorsement would be confirmed in a public rally by the 17 southern states in Asaba on Feb. 28.

“Your achievements are very visible for all Nigerians to see. We have seen your development strides in education, transport, security, agriculture and other sectors of the economy.

“We want continuity and consolidation of this administration’s achievements”, he said.

Kabiru said that the Arewa community was mindful of the future of the country and believed that the future would be better guaranteed under President Jonathan.

He added that the community believed in the commitment and determination of the president to make the country great and prayed that Nigerians would join the community in supporting Mr. Jonathan’s re-election bid.

Some of the community members, who supported the endorsement, said they were fed up with the impunity of the All Progressives Congress in Lagos and Ogun States.

The Sarkin Hausawa, Agege, Alhaji Kabiru Ali, specifically said that any right thinking Nigerian did not need to be told who should continue to administer the country.

“We are solidly behind you because we believe it is the PDP that respects our way of life”.

In his response, President Jonathan thanked the group for the endorsement and their support for his transformation agenda.

He pointed out that his administration had not discriminated against anybody and noted that the PDP administration in the second term would restore the dignity of all Lagos residents. “I reassure you that we will run a government that will protect the citizens of the country”, he said.

“You should be free to practice your religion and business which is legal in any part of the country that you live. “We promise you that we will work with you”.