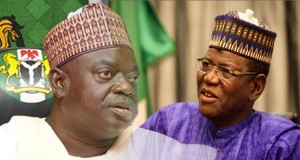 Jigawa State Governor, Sule Lamido and his Niger State counterpart Babangida Aliyu, yesterday, hit back at Kano State Governor Mallam Rabiu Musa Kwankwaso over his accusation that they betrayed five other governors who dumped the People’s Democratic Party (PDP) following their irreconcilable differences with the leadership of the party.

Governors Aliyu Magatakarda Wamakko of Sokoto; Abdulfatah Ahmed of Kwara; Rabiu Kwankwaso of Kano; Babangida Aliyu of Niger; Sule Lamido of Jigawa; Rotimi Amaechi of Rivers State and former Governor Murtala Nyako of Adamawa State, who were members of the G-7, within the PDP, had opted out to form what was known then as the new PDP in 2013. But while the other five governors teamed up to form the All Progressives Congress (APC), Lamido and Aliyu returned to the PDP.

Kwankwaso, who spoke on their exit from the PDP, weekend, accused Aliyu Babangida and Sule Lamido of betraying the other five governors by returning to the PDP.

However, while Lamido agreed with Kwankwaso’s accusation, he explained why he did not follow the other governors, while speaking to journalists in Abuja.

Babangida Aliyu, on his part, dismissed Kwankwaso’s accusation saying there was never a time the G-7 group planned to dump their party (PDP) for another party and that there was no basis for any of the members to label him as a betrayer.

According to him, at the time he led the G-7 group, the objective was to resolve the leadership problem in his party and not to dump it as some of them have done.

“Let me state in categorical terms that I never discussed with the G-7 governors over issue of decamping to the APC. I led the group primarily to stabilize the PDP. At that time, the PDP was having challenges hinging on impunity which had to be addressed,” a statement signed by his Chief Press Secretary Israel Ebije, said.

“Let me, therefore, intimate that based on principle, I never planned to abandon the PDP for another party. It is also important to note that the G-7 achieved its objective of repositioning the PDP which was at the time passing through leadership challenge. Therefore I had no reason to leave, besides our effort brought the ruling party back on its feet.”

He said he will remain committed to the PDP and would work towards ensuring that the party wins all elective positions in Niger State.