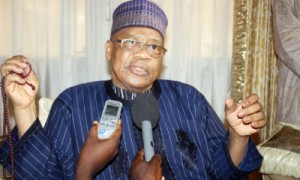 Former military president, Ibrahim Badamasi Babangida, has assured Nigerians that the country is safe under the leadership of President Goodluck Jonathan.

He said this on Tuesday, when he received Jonathan at his Minna, Niger State Hilltop residence, shortly before the president attended the Peoples Democratic Party (PDP) presidential rally in the state.

The former military president expressed appreciation to Jonathan for finding time to visit him at home, in spite of his busy schedule, having previously paid him a visit while he was hospitalised in Germany. He said he shared the same passion for service with Jonathan, who, he noted, had demonstrated the zeal to transform the country.

“I felt touched when you visited me in Germany after nine hours of surgery and you came again?

“You have made a very good decision to visit Minna during your presidential campaign, because Minna is known for producing presidents, beginning from your namesake, President Azikiwe, who was born in Zungeru.

He recalled “hen we were doing nocturnal activities for the PDP, this househeld meetings.

“My family and I are proud of this. I commend the party for being very strong,” he said.

“I see in PDP a party, an organisation devoid of religion. You have shown leadership. Even when others are breaking up, you have remained strong.

“Jonathan and I share a common passion, which is that Nigeria remains strong, united and indivisible. I wish you well. Nigeria under Jonathan is in safe hands,” Babangida noted.

Speaking earlier, President Jonathan said he was always pleased to visit Babangida, who had taken him as a son since his days as a deputy governor. “You have been a pillar of support to me.”

“I have come to present myself and Sambo; you are a leader of our party, you are a stabilising factor of our country, party and have been encouraging the young ones to grow.

“We sincerely thank you for this reception. We pray for long life for you continue to mentor us,” said Jonathan.

National chairman of the PDP, Adamu Muazu, who also spoke, explained that Jonathan and his entourage came to visit Babangida because of the fatherly role the former leader had been playing.

According to him, IBB’s leadership has motivated and encouraged “a lot of us to what we do. We have not had opportunity to thank you as a visionary government.”

“The work you did remain unparalleled in Nigeria’s history,” he said.