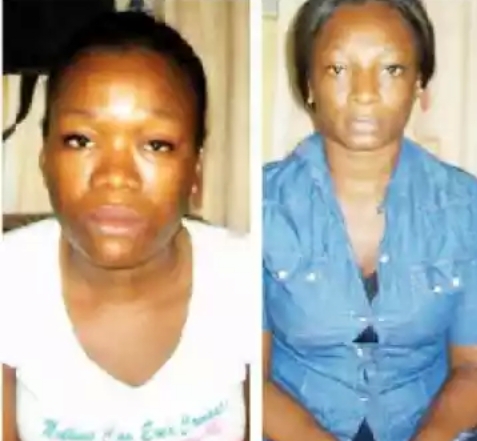 Operatives of the National Drug Law Enforcement Agency have recovered 19.8 kilogrammes of dried weeds, said to be cannabis sativa, from two friends; 30-year-old Sandra Ebere and Maureen Obidike, 33. Punch Metro gathered that the suspects were arrested at the Murtala Muhammed International Airport, Lagos State during the screening of passengers on an Etihad flight en route to Dubai, United Arab Emirate.
It was learnt that the drug was packaged into about 80 parcels and concealed inside foodstuffs and bottles. Our correspondent gathered that Ebere, who studied Economics, told investigators that her travel agent in Dubai directed her to smuggle the drug as a prerequisite for a free visa.

She said, “I used to export foodstuffs to Dubai since 2012. Each time I go to Dubai, I stay for two months and come back because I have no permanent visa. I came to Nigeria since December 2014 to spend the Christmas and New Year holidays at home. While I was preparing to go back, my travel agent in Dubai called me that somebody will give me a parcel to bring to him. He promised me that if I could bring it to him he will prepare my next visa for free. That was how I agreed to take it.” Obidike, in her statement, described her arrest as the backlash of keeping a deceitful friend.

“My friend did not tell me that she had drugs in the luggage before she checked in in my name. She told me that it was foodstuffs, but it turned out to be cannabis. I feel very sad,” she said.

The NDLEA Commander at the Lagos Airport, Mr. Umar Hamza, said the case was under investigation.

He said, “We found 78 parcels of dried weeds that tested positive for cannabis sativa weighing 19.8kg inside foodstuffs and bottles of local alcoholic beverage. The case is under investigation and the suspects are assisting our team of investigators.”

The agency’s Chairman, Mr. Ahmadu Giade, called on travellers to be sure of the content of their luggage before travelling.

“Members of the public must take necessary preventive measures to ensure that they have no drugs in their luggage. They must also not collect luggage from people when travelling. This is very important because such luggage may contain drugs,” Giade said.