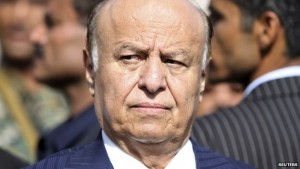 The former president of Yemen, Abdrabbuh Mansour Hadi has fled the capital, Sanaa, weeks after he was released from house arrest by Houthi rebels who forced him to resign. BBC have more:

Mr Hadi later arrived in the main southern city of Aden. It comes a day after rival parties agreed on the formation of a transitional council to govern the country.

Yemen has been in crisis since the takeover by the Houthis, a Shia group. UN mediator Jamal Benomar announced the preliminary accord between feuding factions on Thursday and hailed it as “an important step”.

It is not clear why Mr Hadi was allowed to leave his home. Aides close to the former president told the Associated Press news agency that he was freed after pressure from the United Nations, the US, Russia and local political parties.

Mr Hadi is said to be at his home in a district of Aden. His residence in Sanaa was looted after he left ,witnesses said.