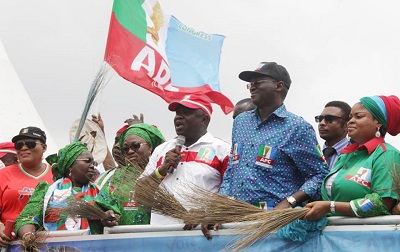 Lagos State Governor, Mr. Babatunde Fashola (SAN), yesterday, alleged that President Goodluck Jonathan, since assumption of office in 2011, never responded to the needs of Lagos residents, saying, “at our time of needs, he did not respond to our pleas”.

The governor made the allegation at the All Progressives Congress, APC, campaign rally at the Ifako-Ijaiye Mini-stadium, Ifako-Ijaiye Local Government Area, which also had in attendance the party’s governorship candidate, Mr. Akinwunmi Ambode, among other dignitaries.

According to Fashola, President Jonathan only remembered residents of Lagos few weeks ago when he visited the state and spent five days holding meetings and distributing different hard currencies to people.

“The president can come to Lagos because it is part of his constituency. But we will not vote for him in the forthcoming election. This was because when we needed him, he didn’t come to our rescue.

“When the Muhammed Mohammed International Airport, MMIA Road failed, we didn’t see him. When Lagos Island began to experience flood and the flood was about to wipe out a whole estate, he didn’t come to Lagos. When I took him to Ibeju-Lekki where they were losing their lands, that day was the last I heard from the President. I wrote several letters to appeal to the President but he didn’t respond.

“All the infrastructure in Lagos were built by taxes paid by Lagos residents. He can come to Lagos 200 times, we will not vote for him”.

Fashola, however, appealed to residents to obtain their Permanent Voter Cards, saying no fewer than 1.4m were still uncollected.

He stressed that, “the PVC is very strategic if the people must have a say in the coming elections”.

Fashola said that another window of opportunity would open today (Friday, February 27) for residents without the PVCs to pick up their PVCs.

“INEC has returned the cards distribution to polling units. The collection exercise will run from today (Friday) till Sunday”, Fsashola said.

In his address, the APC flag bearer urged the electorate not to sell their PVCs, saying “We have heard that dollars are being distributed in exchange for PVC. I will say collect it, it is your money but don’t give them your cards. They are giving you dollars because they have destroyed Naira.

“They are now asking for another four years to further destroy the country, we are saying no to them. We are for change at the centre and continuity in Lagos.

“Our youths are not lazy but just lack opportunity to excel. That is what we are bringing to the state by continuity. We want progress, we want safe Nigeria, for the economy to get better.

“We will work together and make Lagos work for all of us to be more prosperous. That is what APC represents. Those of you without PVC should go and get it, but never sell it”, Ambode urged Lagos residents again.