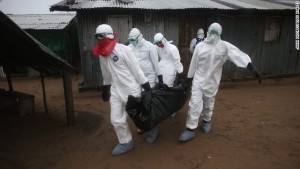 At least 10 Americans who were possibly exposed to the deadly Ebola virus have been flown to the United States from Sierra Leone for observation, the U.S. Centers for Disease Control and Prevention told reporters.

They will be transported by non-commercial air transport and will be housed near the University of Nebraska Medical Center in Omaha, the National Institutes of Health in Maryland, or Emory University Hospital in Atlanta, the CDC said.

All of the individuals who are being flown back to the United States are free of symptoms, the CDC said. A U.S. healthcare worker who tested positive for Ebola while in Sierra Leone arrived at the NIH on Friday and was in serious condition, the NIH said.

It is not clear how the person became infected with Ebola, CDC said. While the virus has killed about 10,000 people in Sierra Leone, Liberia and Guinea, only a handful of cases have been seen in the United States, Spain and Britain.

CDC spokesman Thomas Skinner said 10 people who may have been exposed to the unidentified Ebola patient or who had a similar exposure to the virus as the patient were being flown to the United States. But he said the investigation was continuing and there may be more Americans evacuated from Africa.