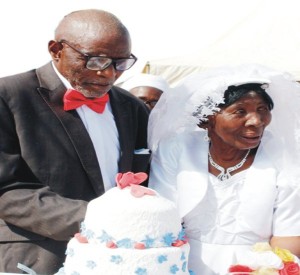 Elder Dikam Garba Dabo’ok and Mrs Ka’a Nafung had lived together as husband and wife for 70 years, . But the couple, now aged 107 and 95 years respectively, have found a new sparkle to rekindle their marital love in the church. The Nation reports:

The church ceremony in Plateau State, has remained the talk of the town in the social diary of the state and may remain so for a long time. This is particularly so because the celebrants are the first couple in the history of the state to be administered marital vow at such unusual ages.

At 95, the bride is well past her menopause. Her surviving first child is 65 years old. The groom, popularly known to many in his neighbourhood as Baba Dikam, is 107 years old and may no longer be sexually active. But all that is not enough to discourage the couple from walking down the aisle arm-in-arm for a new marital oath.

The ceremony, which was held at the Church of Christ in Nations (COCIN), Chizu village in Bwai, Mangu Local Government Area of the state, was a delight to watch as it was packaged in the manner that young grooms and brides would walk down the aisle. The groom was dressed in black suite and a red neck tie to match, while the bride stepped out dressed in a pure white wedding gown with a neatly made hair to match. They drove to the church in separate vehicles, as if they never met before. The groom was accompanied by cutely dressed men and the bride by a long bridal train.

They had a procession and matched into the church separately as if they never met before. They only came together after they were wedded by the officiating pastor. The officiating pastor of the church, Rev. Tongwe Sale, congratulated the couple and admonished them as if they were young couples. He said: “Marriage is ordained by God and it should be kept sacred.” He charged them to keep faith in God since they are still alive, noting that although they are old, they can still be important in the lives of their children and grand children.