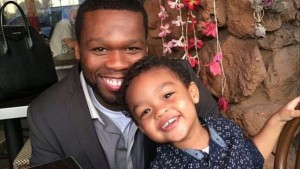 I always like to describe 50 Cent as a businessman instead of a rapper.

The super famous and rich business mogul has his son following in his steps as his kid named Sire has signed a N133m modeling contract with a children’s studio company.

The news has been circulating but 50 Cent just confirmed it by saying: –

On what his son will use the huge amount of money to do at his age, the rapper said all the cash will be injected into Sire’s trust fund.  “It goes into a trust. He can’t even touch it until he turns 18.”

50 Cent said he loves hanging out with his son and he’s enjoying life with him. “I have so much fun with him man. Even my spirits change and I like light up when I talk about him because he’s like at that point where he repeats everything.”

Controversial Nollywood actor, Uche Maduagwu has stated that popular music executive, Don Jazzy would get married in 11 months time because his marriage has...
Read more

Majek Fashek has revealed through his manager Umenka Uzoma, that Nigerian rapper, Olamide is the only artiste who supported him financially as he struggled with health...
Read more
- Advertisement -