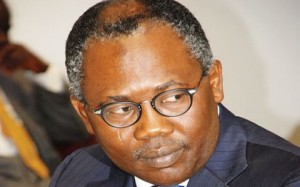 Attorney General of the Federation, Mohammed Adoke, yesterday, denied being behind spurious lawsuits aimed at scuttling the rescheduled March 28 and April 11, 2015 elections. He also denied being given the sum of N2 billion by President Goodluck Jonathan to sponsor cases in court to disqualify Major General Muhammadu Buhari.

The AGF made the clarification in a statement made available to Saturday Vanguard by his Senior Special Assistant, Mr. Peter Akper, in Abuja on Friday. This came in response to an online publication, which had accused him of sponsoring spurious groups with the huge war chest he received from the President to stop Buhari from contesting the election or halt the polls altogether.

“I wish to categorically state from my vantage position that these allegations are not only false but are designed to harass, distract and intimidate the Attorney General from discharging his duties.

“Let Nigerians be assured that the Attorney General of the Federation remains committed to the conduct of free, fair and credible elections and within the time frame clearly stipulated in the Constitution of the Federal Republic of Nigeria, 1999 and the Electoral Act, as amended.

“Mr. Mohammed Bello Adoke is very conscious of the ethical and professional demands of his high office and his constitutional responsibility as ‘Guardian’ of the Constitution and has demonstrated this time and again in the discharge of his duties.
He is one Public Officer that has the moral conviction and courage to speak the truth at all times in the defence of national interest no matter whose ox is gored.

“Aware of his place in history and the experiences of his predecessors in office, Mr. Adoke has refrained from partisanship and has not allowed it to becloud his sense of judgment,” the statement read.