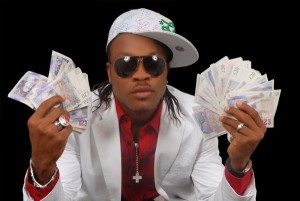 The ghetto dance-hall singer who hasn’t been as famous as he was couple of years ago, has crowned himself with a new title.

In a chat with Vanguard, African China said he’s the Fela of our time.

He also talked about his career, his investments and even comparing the kind of money he made to the likes of Wizkid and Davido’s money

China said, “No, I did not collect the kind of money they are collecting now. But I think you should know something, we pushed the bill from 30 thousand naira to 8 hundred / one million. I made investments that can compete with whatever they do with their money. Therefore, I don’t regret not making what they are making these days.”

“You should ask yourself and tell yourself the truth. My songs has lasted 17years now; which of these songs do you think will last two years?  I’m not scared of the huge number of artistes out there, because I know what I’ve got and will give my best to my fans.”

“It is not as if I’m boasting but I have dedicated so much of my time and energy to it because I have already set a standard and that standard will not drop but will continue to rise because I am born to sing and entertain people. That’s why I am “African China” the legendary, take it or leave, I am the Fela of our time.”
When asked about the things going on with him after he released his last album, he said “Well, I just took a break to bond with my family. I didn’t go off the music circuit but had been in the studio working on a new album that is about to be released.
And my silence has nothing to do with financial challenges, don’t forget am still the C.E.O. of 45Entertainment.”