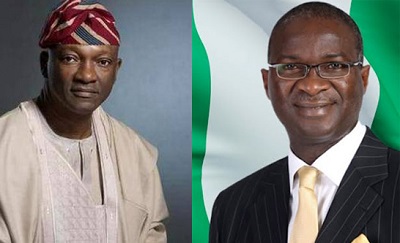 Governor Babatunde Fashola of Lagos State, has said the governorship candidate of the Peoples Democratic Party, Jimi Agbaje, knows next to nothing about the state.

The governor spoke on Tuesday during the inauguration of the Maidan-Aina-Agiliti network of roads and bridge in the Kosofe Local Government Area of the state.

Fashola described the inaugurated roads as evidence of slum regeneration and urban renewal, adding that whenever he listened to Mr. Agbaje saying his administration had not regenerated the slums, he thought it was a demonstration that the PDP flag bearer does not know anything about the state he hopes to govern.

He said, “When I hear the pretender to my office who is trapped under the umbrella, I feel so sorry for him because it is becoming more obvious that he does not know Lagos. Because if he knows a place like Maidan- Agiliti, he would not have made such a statement. But as I have said, his knowledge of Lagos is limited to his being driven from his home to the airport”.

Fashola also called on residents of the state to vote out President Goodluck Jonathan at the March 28 presidential election.

According to Fashola, if Nigerians voted to change the presidential candidate of the PDP, for the first time in the history of Nigeria, the citizens would have changed a government that had disappointed them, adding that all his life, it was the military that always changed governments that performed below expectation.

“Any politician who makes you a promise and comes back after four years without fulfilling those promises and is promising you that he would do more, must be voted out. Any politician who cannot make definitive positive impact in your life within his first term of office will not do anything during the second term.

“In the second term, he is not accountable to you anymore. This is the only time you can hold him, when he is seeking re-election. In this campaign, the PDP Presidential candidate can make all sorts of promises but for me as a citizen, this issue is no longer about promises. The issue is about his record of performance”, he added.