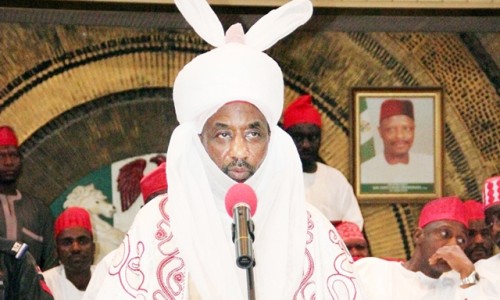 The Management of the Nigerian National Petroleum Corporation (NNPC) has raised a strong objection to the latest gambit of the former Governor of the Central Bank of Nigeria (CBN) and Emir of Kano, Muhammadu Sanusi II, who against the findings of the Senate Committee on Finance and PricewaterhouseCoopers (PwC) has reiterated his false allegation of unremitted $20bn oil revenue against the Corporation claiming that the issues surrounding his allegation have not been adequately addressed.

In a statement made available to journalists, the Corporation stated that the respected traditional ruler has got it wrong again in much the same way his failure to grasp the issues of remittances to the Federation Account led him into the embarrassing error of alleging that NNPC failed to remit $49.8bn oil revenue into the Federation Account, an allegation which has since been proved to be false even by his own account.

“Our attention has been drawn to the latest gambit of the former CBN governor and Emir of Kano, Muhammadu Sanusi II, to reinvent the wheel of his false allegations against the Nigerian National Petroleum Corporation by insisting, during an interview with Christiane Amanpour of the Cable News Network (CNN), that the issues surrounding his allegation of unremitted $20bn have not been adequately addressed.

“According to the royal father, ‘One of them (issues) is the billions of dollars being paid in kerosene subsidies without appropriation by the National Assembly and against a presidential order and we don’t know who authorised those payments and yet no one has owned up to say I authorised the payments, I made a mistake’.

NNPC said “But it is on record that he (as CBN Governor) attended the hearings of the Senate Committee on Finance where the issue of kerosene subsidy was exhaustively looked at vis-à-vis the Presidential Memo directing the removal of kerosene subsidy. The explanation was that the process of implementing the Presidential directive was not followed through by the Minister of Petroleum Resources at that time as required by law which technically meant that kerosene subsidy was not removed. It was on the basis of this that the Senate Committee on Finance in its report recommended that the Executive should prepare and present to the National Assembly a supplementary budget ‘to cover the expenditure in the sum of N90.6bn for PMS (premium motor spirit) subsidy 2012 and N685.9bn for kerosene subsidy expended without appropriation by the National Assembly’.

“PricewaterhouseCoopers (PwC) also observed in its recent forensic audit report thus: ‘Regarding the issue of subsidy on DPK (kerosene) the Presidential Directive of 19 October, 2009, was not gazetted and there is no other legal instrument cancelling the subsidy on DPK. The Senate Committee had also concluded that all that was now required was for the FGN to propose appropriation for the unappropriated subsidy for the period in a supplemental budget’.

“We are therefore at a loss as to what Sanusi II meant by his statement that issues surrounding his allegation of unremitted $20bn, especially regarding kerosene subsidy, have not been adequately addressed.

“It would be recalled that Sanusi II began his campaign of calumny against the Corporation with a false alarm that it failed to remit a whopping $49.8bn being proceeds of crude oil sales into the Federation Account.

“Upon reconciliation of the figures with relevant agencies whereupon it was discovered that the balance of unremitted oil revenue was actually the amount spent by the Corporation on its operations in accordance with the law (NNPC Act), Sanusi II began to play games with figures submitting at various times that $10.8bn, $12, and $20bn was what was unremitted by the Corporation.

“Both the Senate Committee on Finance and PricewaterhouseCoopers have investigated the allegations and came out with reports exonerating the Corporation.

“Why the royal father appears hell-bent on hanging a tag of corruption on the Corporation even when all the inquiries into his allegation of unremitted funds have proved otherwise remains a mystery to us.

“But we believe that his royal dignity will be best served and preserved if he owns up to his error of raising false allegation and apologize for same rather than continue in error believing that if he continues to harp on his false allegation it will someday be accepted as the truth”.

The Corporation enjoined Nigerians and the general public to discountenance the latest attempt to resurrect the campaign of calumny against it.