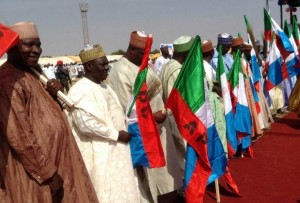 He said this while being received by the National Leadership of the party just days after he left the ruling People’s Democratic Party (PDP). The APC welcomed him into its fold with an automatic membership of the Board of Trustees of the party.

Also given to N’Abba were copies of the party’s constitution, manifesto and a pamphlet by the APC presidential candidate, General Muhammdu Buhari, titled “My Pact with Nigeria”.

“My total sum of my communication was that I have decided leave the party that I have been a member for the last 16 years. When I and other senior members of the party left the party between 2005 to 2007, a lot of things happened that we thought were undemocratic. We had to leave the party. Eventually some of us returned after the late Umar Yar’Adua made some certain promises about change in the party which never happened,” the former speaker said.

“I believe that this country more than any other time in our history needs change, particularly on the top. In the last 16 years there has been misrule in this country. Nigerians are being misruled by successive Presidents of the PDP. Some of us fought over this and to no success. I believe that the momentum today is in favor of the APC, and we should never allow it to go down.

“It is in that quest that I feel having resigned from the PDP, I must join the APC so that I can help to roll that momentum and that it is quite remarkable that since yesterday I have been receiving calls from nook and crannies of Nigeria. That is to show you that the APC is a national party.”

Speaking further, he said: “People from all corners of this country have called me, including my colleagues, former members of the House of Representatives who have decamped to the APC. My duty today is to continue to work with you and the presidential candidate of the party and at the same time try to consolidate the gains made so far.

“I’m a witness to how popular General Buhari is, not just in the north but all over the country and that I’m happy that he is going to be the next president of this country. It is our desire that he should become a national leader not a sectional leader”, he said.
He also warned against sectional marginalization, submitting that all regions of the country have comparative advantage to help develop the entire country.

“Nigerians have come a long way and I have continued to say that we can not continue to rule this country on the basis divisiveness. We can succeed in this country without maligning other parts of the country because we have all it takes.

“All the regions of this country have comparative advantages which we can build on and succeed and we don’t have to malign others to be able to succeed. God has created us into different tribes and nations. If we are all Hausas or Igbos or Yorubas, there may have been no desire for exchange among us and we may not know one another. It is a test on all us,” N’Abba said.

The National Chairman of APC, Chief John Oyegun, who welcomed the former speaker described him as a man of indisputable quality; the type of man the party needs.

“This is one of the few truly beautiful events that I have been privileged to preside over. For the APC, it has been a matter of quality. Today, we are recovering a personality of indisputable quality into our ranks. A man of achievement, a man of principle and a man who has displayed in no uncertain terms that he share the ideals our party.

“For a long time, he struggled within the fold of the PDP to see if he can steer the ship back to safe waters. But of course, all that was to no effect because. Like he said, the dubious characters have taken over the PDP and so, it was no longer in the mood for change.”

Also speaking, former national chairman of the PDP now chieftain of the APC, Chief Audu Ogbe, urged N’Abba to prevail over his colleagues to join APC. According to him, APC was a party for all Nigerians.

“I am glad that Ghali Na’Abba is back. I happened to be chairman when the impeachment saga took place and I knew how strong Ghali was, insisting that the right thing must be done. For a number of reasons such as national survival and cohesion, I tried to persuade him not to go ahead with it and he listened. It was not because the grounds on which the impeachment was based were wrong but because we advanced other overriding national considerations. Welcome to this party, Ghali Na’Abba and all of you out there who are still preparing to join this party.