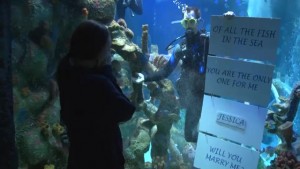 A fish keeper at an Arizona aquarium gave his girlfriend  a surprise with an underwater marriage proposal when he asked the question from inside a shark tank. UPI reports:

The worker at Sea Life Aquarium in Tempe, identified only as Evan, enlisted the help of colleagues at the facility to have his girlfriend, Jessica, brought to the tank where sharks and eels are kept so he could surprise her by unfolding a sign with his marriage proposal.

“Of all the fish in the sea, you are the only one for me. Jessica, will you marry me?” the sign read.

Jessica enthusiastically accepted the proposal, resulting in congratulations from the strangers who took a break from looking at fish to witness the unusual question-popping.