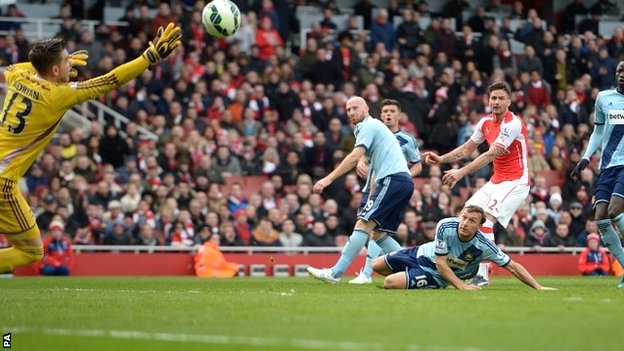 A convincing win ahead of a feisty second leg against Monaco in the Uefa Champions League, meant the North London club moved four points ahead of Manchester United who they knocked out of the FA CUP.

Olivier Giroud returned to Arsenal’s starting lineup after missing out in Monday’s cup win over United, and Oxlade Chamberlain’s injury created space for Theo Walcott on the right wing.

Walcott who has struggled for full match fitness had the first real chance of the afternoon but was bullied off of the ball by a vibrant James Collins.

Sam Allardyce apparent tactics was pointed to defending deep to frustrate Arsenal, and then catch the host on the counter.

That setup proved effective as Kevin Nolan’s shot from a counter was saved, and then a mouthwatering through ball by Alexandre Song to teammate Diafra Sakho was blocked.

The visitors looked to keep the scores nil at halftime, but Giroud had other ideas.

After a decent pass by Ramsey, the former Montpellier striker simply toured the Westham defense, then sent a thunderous left footed effort to back of the net.

Allardyce’s halftime talks proved effective as the Hammers came out firing in the subsequent half.

However, Ramsey’s left footed shot from the centre of the box, after a fantastic one-touch play with Giroud almost but sealed the victory for Arsenal, before substitute Flamini buried his effort after a cross from Cazorla to keep the London club in the chase for Champions League berth.