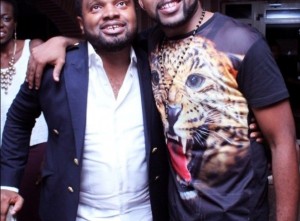 Cobhams is definitely one of the best music producers on the continent and even outside the shores of Africa.

Now, Banky W has started putting in work on his 6th studio album scheduled for release later in the year.

The singer recently announced that he’s working with music production genius, Cobhams Asuquo on the album and he’s quite excited about it.

You’d remember that the pair first worked together on Banky W ’s 2009 single, ‘Strong Ting‘ off the W Experience album.