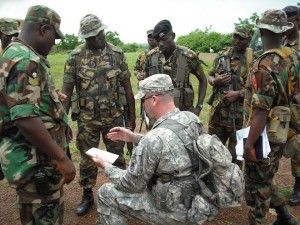 A South African mercenary was shot and killed by friendly fire during operations against Boko Haram in northeast Nigeria, a military officer and a civilian vigilante said on Thursday.

The vigilante, who pleaded anonymity for security reasons, told AFP that the man died on Wednesday as Nigerian Army soldiers fought to recapture the town of Bama, in Borno state from Islamist sect Boko Haram.

“He was killed when a convoy he was travelling with was mistaken for that of Boko Haram insurgents, which prompted a military tank to open fire,” he added.

An Afrikaans-language website in South Africa, Netwerk 24, identified the victim of the friendly fire incident as Leon Mare Lotz, a private military contractor.

“I just know Leon was killed. I know that he went to Nigeria with his eyes wide open and was aware that it was a dangerous operation,” the SOuth African news portal quoted his wife, Almari to have said.

“He was with some of his brothers-in-arms who have walked a path with him for many years.”

The report said Lotz’s driver was also killed in the shooting.

The recent successes recorded by the Nigerian forces have been achieved through collaboration with forces from neighbouring countries. Apparently, there are also mercenaries working with the military in the fight against Boko Haram. Reports say these mercenaries from South Africa and Russia are in hundreds. According to Reuters, quoting regional security, defense and diplomatic sources, the mercenaries were being paid about $400 in cash each a day.

Defence spokesman, Major General Chris Olukolade, however, denied the report. He explained that “there were offers of training and intelligence assistance from friendly countries. Also, our neighbours operating under the auspices of the Multinational Joint Task Force are also backing our efforts from all our borders with them and some of these arrangements predate the present operations”.