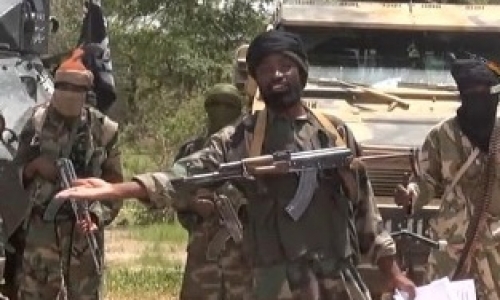 President Idriss Deby of Chad said Wednesday he knew where the Boko Haram leader, Abubakar Shekau, was hiding out and vowed that the leader of the insurgent group will be killed if he fails to surrender.

“It is in Abubakar Shekau’s interest to surrender, we know where he is. If he refuses to give himself up, he will suffer the same fate as his comrades”, Mr. Deby said at a press conference with his visiting Niger counterpart, news agency AFP reported.

The Chadian president vowed to “wipe out” Boko Haram, responsible for more than 15,000 deaths and displacement of millions.

Mr. Shekau has remained elusive since his group resorted to targeting civilians, security officials, villages, schools, markets and places of worship in 2009. He, however, appears infrequently in propaganda videos released by the sect.

You may recall that Deby had been accused in the past of providing a safe haven for Boko Haram insurgents, and was purportedly the mediator in a phony ceasefire deal between the Nigerian government and the sect in 2014.