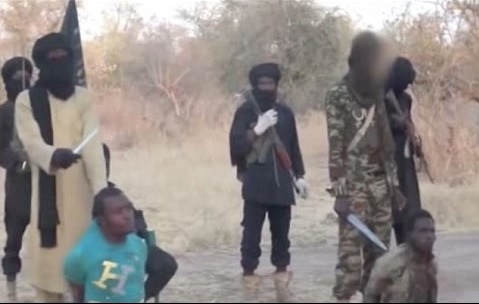 Boko Haram leader, Abubakar Shekau, has pledged allegiance to the Islamic State (IS) group in an audio recording released Saturday.

According to AFP, the voice on the audio message, which was believed to be that of Shekau, was released via Boko Haram’s Twitter account.

“We announce our allegiance to the Caliph of the Muslims, Ibrahim ibn Awad ibn Ibrahim al-Husseini al-Qurashi”, Shekau, who is Nigeria’s most wanted man, said in the message.

Qurashi is better known as Abu Bakr al-Baghdadi, leader of the IS group, which has proclaimed a caliphate in parts of Syria and Iraq.

Shekau spoke in Arabic, but the message contained French and English subtitles.

It was not immediately possible to verify the authenticity of the message.

Shekau was not pictured, a contrast from most of Boko Haram’s past messages in which the Islamist leader has been shown, often in close up shots.

But Shekau did identify himself in the recording, which was accompanied by the subtitles and a graphic including an image of a radio microphone.

The release of a video last week, purporting to show the beheading of two spies – IS style – by Boko Haram, has been viewed in some quarters as a confirmation of the group’s promise, in some social media messages last month, that it is considering swearing allegiance to IS.

Boko Haram’s violent campaign in Nigeria, particularly the Northeast, led to the killing of at least 10,000 people last year, according to the Council on Foreign Affairs. At least 1.6 million people have also been displaced from their homes in the group’s brutal 6-year uprising to create an Islamic state in Nigeria.