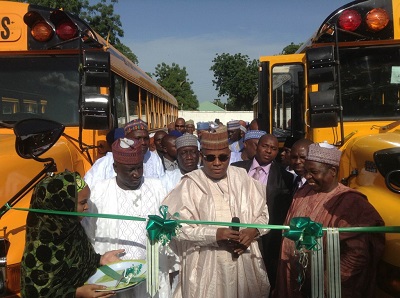 Commercial drivers in Borno State on Sunday beamed with smiles as the Borno State Government bought and handed over 540 buses to them to enhance transportation in the state.

The state governor, Kashim Shettima, handed over the keys to the 10-sitter Volkswagen buses to officials of the National Union of Road Transport Workers, NURTW, and other drivers yesterday in Maiduguri, the state capital.

According to Shettima, the vehicles will benefit public transportation in the state and ease the losses suffered by commercial bus drivers due to the Boko Haram insurgency.

At a handing over ceremony, which took place at government house, Maiduguri, the governor noted that the vehicles were given out as a soft loan with the beneficiaries expected to pay 50 per cent of the cost of procuring the buses.

The buses cost the state government about N1.1 million each with each beneficiary expected to pay N550, 000 in installments over a flexible period.

Gov. Shettima said the gesture was in line with other efforts of the state government towards making life easier for persons affected by the insurgency.

“Since Borno State started facing the challenges of insurgency in 2009, one group that has remained a silent victim is the National Union of Road Transport Workers”, Mr. Shettima said.

“Countless number of commercial drivers who are members of the union have lost their lives on account of moving people moving from one point to another in order to make people succeed in doing businesses, visiting families and keeping our society functional.

“We all know that once vehicles, especially commercial vehicles connecting states are out of the road, then a society is brought to a halt. This is because more than 70 per cent of citizens all over Nigeria depend on commercial transport for mobility of trade, social and cultural activities.

“We depend on commercial transport for the food we all eat in houses and virtually all our house hold items. What really surprises me is the courage of members of the NURTW. Drivers under this association defy all fears and convey people, food items and other essentials of lives into Borno State in the darkest days of Boko Haram Insurgency. Some of them even lose their lives in the process but many others still carry on. A lot of them take the bull by its horn.

“This is a group that keeps Borno connected to the rest of Nigeria and helps in conveying the needs of our people into Borno State so we can all exist as a society. If anyone recalls the attacks of Boko Haram along Ngamdu, Mainok, Benesheikh, Jos, Potiskum as well as the religious riots in Kaduna and reprisals in the southern Nigeria over the years, then he or she will appreciate commercial drivers under the NURTW, because often times, they were caught on the high ways”, the governor said.

He explained his administration’s efforts in transportation.

“As part of our own measures to make activities of members of the National Union of Road Transport Workers easier, this administration has since 2011 embarked on different road projects to creatively open up Maiduguri which is not just our largest city in the state but that with the highest traffic of motorists, many of which, are members of the NURTW.

“We came with so much ambition to remodel Borno State and make it an envy of many states in Nigeria. We wanted to make Borno a place every citizen would be proud of and by Allah’s will, we will succeed”.

In his response, the state chairman of NURTW, Bello Maduganari, said, “By giving out 450 buses to the NURTW, the governor has not only made life easy of 540 beneficiaries but also assisted 4500 families because each of the buses would have direct impact on 10 families based on known projections worked out by the union many years ago.

“No Nigerian governor has paid attention to commercial drivers under the union as much as Governor Shettima has done”.