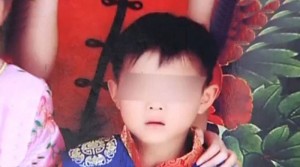 A six-year-old boy suddenly began to bleed from his eyes, ears, nostrils as well as mouth after eating a lollipop he had found outside his home in Heze, Shandong province, China.  Daily Mail reports:

A tragic accident occurred while the boy, called Xiao Li, was playing hide-and-seek with his friends. The alarm was raised when they suddenly began screaming for help. The boy was found unconscious and bleeding from his eyes, ears, nostrils and mouth by his father shortly after.
The kid was rushed to hospital where doctors fought for his life for two days but little Li succumbed to the poison and died. A hospital spokesman said, “His internal organs had been destroyed by the poison and his blood had turned black.”
Tests carried out on the lollipop showed that it had been coated in TETS, a highly lethal neurotoxin found in rat poison. It’s use worldwide has been banned since 1984 but is still readily available in China, although illegally. Police are now investigating the case.