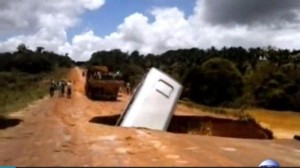 A video camera was running in the Brazilian state of Paras when a bus stuck on a road disappeared into a sinkhole and resurfaced in a fast-moving river. Read more UPI has more:

The bus became stuck in the mud Monday on a road near the cities of Itaituba and Ruropolis when a sinkhole opened up and swallowed the vehicle whole after the driver and passengers had gotten off the vehicle.

The footage of the incident shows the bus disappear into the sinkhole and emerged a few seconds later being carried away by the fast-moving river waters next to the road.

No injuries were reported.