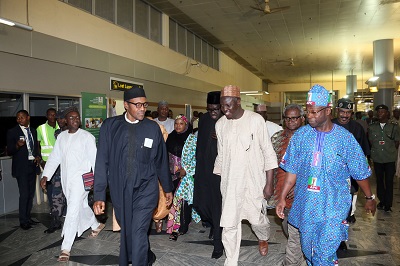 The presidential candidate of the All Progressives Congress, Maj. Gen. Muhammadu Buhari (retd.), on Friday returned to Nigeria after a two-week trip to the United Kingdom.

Buhari, who arrived at about 5.40am aboard a British Airways flight, was received by a large crowd, which included journalists, who had been at the airport since 4 a.m.

He later addressed the waiting crowd, and spoke about rumours of his ill-health, describing such reports as unfounded, saying he was physically and mentally fit.

The APC candidate said he merely took some time off his campaign ahead of the March 28 polls to get some rest.

“I just went off for a couple of weeks to rest. That’s all I did”, he said.

When prodded by newsmen on whether he visited any hospital and give details of his visit with prominent politicians while in the United Kingdom, Buhari said, “What is wrong for me to go the hospital?

“I went to Chatham House. I read an address and there was a question and answer session, that’s all”.

The News Agency of Nigeria recalls that the APC presidential hopeful left the country on Thursday, February 19 for London.

He appeared at the Royal Institute of Internal Affairs, popularly known as Chatham House, to deliver a lecture.

Buhari delivered a lecture on what he would do to salvage Nigeria should he emerge winner of the March 28 presidential election.

He also met a host of prominent politicians during his visit.