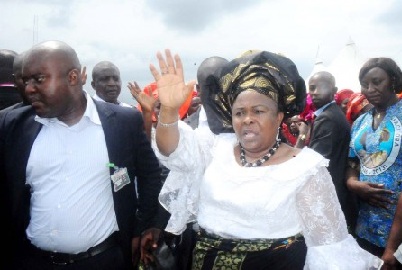 Nigeria’s First lady, Dame Patience Jonathan, has said she would not respond to those who criticize her and her husband, President Goodluck Jonathan, describing them as rascals.

Speaking Wednesday in Rivers State at the Peoples Democratic Party’s women presidential rally, which held at the Liberation stadium, Port Harcourt, Mrs. Jonathan said those abusing the first family were not voted by the people.

“I will not condescend so low to join issues with them because they are rascals and I will not respond to them.

“Don’t let me open my mouth to talk about these rascals”, she stressed.

Criticizing some of the developmental projects in the state, the president’s wife particularly took a swipe at the Rivers monorail project, saying “it will not be completed until hundreds of years. It will remain like that until my great grandchildren are born”.

She continued her tirade against the state governor, Rotimi Amaechi, saying “We did not vote for these people. We in Rivers state voted Celestine Omehia but these people came and took our mandate away and today they are abusing us. They don’t have respect for elders. They are busy abusing me and my husband. I will not answer them.

“In Rivers state we respect elders but these rascals have no respect for their elders. We must vote them out in April”, the first lady added.

The president’s wife, who likened the All Progressive Congress, APC to the outdated ‘APC’ pain killer drug, advised people of the state not to vote for the party, saying it had no program for a modern-day Nigeria.

“Vote out this expired drug called APC”, she said.

Berating the APC presidential candidate, Muhammadu Buhari, the first lady said as a military Head of State, he was a dictator and would never change.

According to her, Buhari would be intolerant to opposition and contrary ideas if elected president, stressing that he would throw more Nigerians into jail than he did as military dictator.

“Whenever he (Buhari) comes to you again, ask him what he did for Rivers state when he was Head of state”.

Sounding confident that her husband would be re-elected for a second term, Mrs Jonathan also said the PDP governorship candidate in Rivers State, Chief Nyesom Wike, would succeed Amaechi as governor of the state.

“PDP will install Nyesom Wike as governor because President Jonathan is a lion and he gave birth to a lion”, she said.