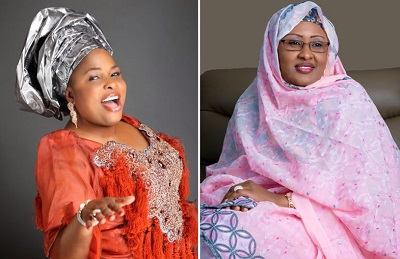 The Director, Media and Information Technology, Buhari Campaign Organisation, Dr. Chidia Maduekwe, has said that wife of the presidential candidate of the All Progressives Congress, Maj.-Gen. Muhammadu Buhari (retd.), Aisha, will not follow in the steps of Nigeria’s First Lady, Dame Patience Jonathan, to play political thuggery, because she is not a tout

Speaking with Saturday PUNCH in Abuja on Thursday, Maduekwe said, “You should know it is beneath the person of our respected General’s wife to join issues with Dame Patience Jonathan.

“Mrs. Jonathan has clearly shown that she lacks the discipline and composure required of the occupant of the office of the First Lady. It is neither the General’s style nor is his Madam’s style to join Mrs. Jonathan to play the role of political tout.

“Mrs. Buhari is too refined and well groomed to descend to the level of insulting someone else’s husband in the name of politics.

“There is this adage which says you don’t run after a mad person who took your cloth while you were taking your bath because those who see you running after the mad person may not distinguish between the mad person and you”.

The campaign organisation was reacting to a report that Mrs. Jonathan said Buhari, due to old age, may not have a functional brain.

She said this at a campaign rally in Lokoja, the Kogi State capital, on Tuesday.

She said, “Vote for my husband, Jonathan. Do not vote for Buhari. He is an old man. People, when they become old, may not reason well and their brain may even be dead”.

Also reacting to Mrs. Jonathan’s offensive against Buhari, Chairman, House of Representatives Committee on Diaspora Affairs, Hon. Abike Dabiri-Erewa, also described her as “an embarrassment to Nigerians and Nigeria”.

Dabiri-Erewa, who is an integral member of the APC Presidential Campaign Council, described Mrs. Jonathan as “crude” in her actions, adding that her utterances had taken away the “poise” associated with the office of the First Lady.

She said of all Nigeria’s First Ladies, Mrs. Jonathan remained the “worst”.

Dabiri-Erewa said, “Mrs. Jonathan is an embarrassment to the whole country. The only people shouting her praise or listening to her are the sycophants; outside them, nobody else does.

“She is crude and unrefined. When you travel out of the country, Nigerians keep asking you how we came this bad”.