Canadian Soldier Dies In Iraq From Friendly Fire, 3 Others Injured 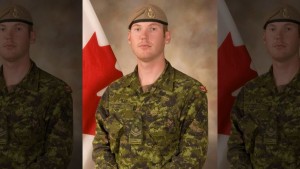 Canada suffered its first fatality in the ongoing war in Iraq after friendly fire claimed the life of a special forces member on Friday. The Huffington Post Canada reports:

Sgt. Andrew Joseph Doiron was killed on March 6, at 11:50 p.m. local time. Three other soldiers were also wounded after members of the Special Operations Forces were “mistakenly engaged by Iraqi Kurdish forces following their return to an observation post behind the front lines,” the Department of National Defence said.

The department would not say how extensive their injuries were but Defence Minister Jason Kenney said they were in “stable condition.”

Kenney said Doiron’s death would not affect the Conservative government’s decision to renew, or not, the six-month mission in Iraq against the Islamic State of Iraq and the Levant — commonly referred to as ISIL or ISIS, when its mandate ends on April 7.

“We believe there continues to be a very real national security imperative to join with our allies in confronting this organization (ISIS) and not sit on the sidelines,” he told reporters. “This was a very sad and tragic incident of friendly fire caused by a failure of identification.”

Share
Facebook
Twitter
WhatsApp
Previous articlePhoto: Julius Agwu And Wife All Over Each Other In Hotel Room
Next articleLola Rae Is Going Bald??? See Her Hair Falling Apart At AMVCA Performance
- Advertisement -