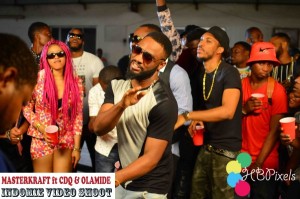 When I first heard this song, I didn’t really think there was something special about it; I guess I was wrong.

Apparently, the song is one of the most popular songs currently in the country.

The video for ‘Indomie’ by MasterKraft featuring CDQ and Olamide has cameo appearances by a number of stars including Praiz, Lynxxx, Skuki, Lil Kesh and more.

The video, shot in Lagos, was directed by Adasa Cookey of Squareball Media.