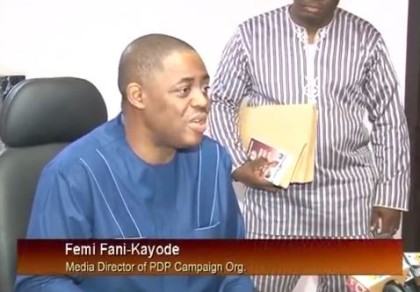 The campaign organization argued that had the governor taken the advice and acted in accordance with the security reports that Chibok town was not safe for the examinations, the abducted Chibok schoolgirls would have been saved the ordeal to which they have been subjected by Boko Haram insurgents these past 329 days.

The campaign organization, therefore, told the governor to be prepared to face investigation and prosecution after leaving office, if found to have been culpable in the circumstances that led to the abduction of the girls on the night of April 14, 2015.

Director of Media and Publicity of the PDPPCO, Femi Fani-Kayode, said this in a statement issued on Monday in Abuja, by his Special Assistant (Media), Mr. Sufuyan Ojeifo, in response to Governor Shettima’s attack on him over his comments on the fate of the Chibok girls.

Fani-Kayode said, “Shettima will not be governor forever and when he is no longer in office, his role in the Chibok affair would be investigated and, if found wanting, he would be prosecuted”.

He accused Shettima of reflecting the thinking of his party over the whole mess that his insensitivity allowed to happen.

The statement said, “The governor of Borno State, Kashim Shettima is the most irresponsible, insensitive and callous governor in Nigeria.

“He is a wicked man whose mindset reflects the thinking of his party, All Progressives Congress. He, more than anybody else, is responsible for the abduction of the Chibok girls.

“And he should bear full responsibility for it. The man should shut up and bow his head in shame because it was due to his irresponsibility as the chief security officer of Borno State that those little girls in Chibok were abducted, raped, sold into slavery and subjected to terror”.

The PDPPCO spokesman added that the circumstances that led to the abduction of the innocent girls, who were writing their examination in an environment that was everything but secure, underscored the governor’s negligence.

He further stated that the governor must give account to God and to the Nigerian people for what he has done to those girls.

He said, “We are accusing him of being responsible for the abduction of the Chibok girls because he was warned by the Federal Government and by the West African Examination Council not to allow the examination take place in Chibok.

“He ignored the warning and promised to guarantee security for those girls. When time came, the governor did not even deploy one policeman, let alone adequate security.

“He betrayed the girls; he set them up; he opened the door for them to be abducted by the Boko Haram and instead of asking for forgiveness and repenting of his wicked ways, he is talking nonsense”.

Fani-Kayode said in any other country, the governor would have been arrested and prosecuted for collaborating with Boko Haram, but regretted that in Nigeria, instead of him showing remorse, he (the governor) went all over the world attacking President Goodluck Jonathan and the Federal Government over the Chibok affair.