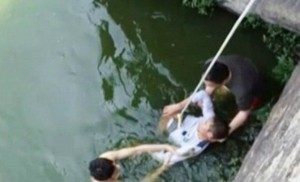 A Chinese groom was so angry at being forced to marry an ugly bride that he tried to kill himself. Police officers were called to a lake in the city of Shiyan in the central Hubei province in China, after receiving reports that a man had been spotted attempting to kill himself by drowning. Read more from Scoop:

According to the People’s Daily Online, the would-be groom was discovered floating face down in the lake but was pulled from the water alive and is expected to make a full recovery.   Describing the moment he discovered the groom, police officer Hou Kunshan said: ‘I saw a man floating in the water face down. We couldn’t see his condition but when I got closer I could see that it was rather serious.’

The police officer immediately dived straight into the water to save the drowning man – not even taking them time to remove his jacket before doing so.

‘I first dragged him towards the wall but as I knew I didn’t have the strength to get him out of the water alone I put him near the wall and waited for the fire brigade to arrive,’ he said. When the firefighters arrived at the scene they used safety ropes to winch the man to safety. He was taken to the local hospital for observations and is now expected to make a full recovery.