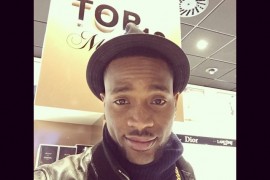 D’banj might want to get the best lawyers he can afford right now because the sh*t is about to hit the fan with regards to his apparent debt situation. According to reports from Netng, the law court has fixed March 30th as the hearing on the case between D’banj and Henry Ojogho Vice chairman of MindHub Technologies.

Nigerian music superstar D’banj is still in celebration mood with parties and concerts around the world celebrating his 10th year anniversary as an entertainer; however his alleged debt allegation crisis that seems to have died down has reared its ugly head up again.

In the last quarter of 2014, multiple media reports alleged that D’banj might be dragged to court by a top oil and gas industry player, Henry Ojogho, Vice Chairman of Broron Group. Ojogho, who is also the Vice Chairman of MindHub Technologies, an integrated Rice farming and milling production company, who alleged that D’banj, through his company, DKM Media Limited, obtained a loan of over N60m from him in January 2013 and has not paid back the said sum despite signing an undertaking to do so.

Following this allegation, the writ of summons and other relevant documents in the suit was posted on D’Banj’s residence on Osaro Isokpan Street in Lekki Phase 1. The pasting was done by the court bailiff on December 17, 2014 at about 1:35p.m, pursuant to order of court made on November 12, 2014 having been satisfied that the defendant was evading being served the notice. Subsequently, the court case between the DB Records boss and Mindhub Technologies bearing suit number: LD/ADR/445/14 was scheduled to commence hearing on Monday, January 26, 2015 at the Multi-door Courthouse in Obalende, Lagos, but it was indefinitely postponed as a result of strike by the Judiciary Staff Union of Nigeria (JUSUN) which paralysed activities and court rooms remain closed.

The strike was recently called off by the judicial workers, and immediately a new date was set for the court case. Speaking exclusive with NET, a source in the camp of the claimant’s camp said, ‘Yes, we are back to court, and we are aware that D’banj has secured the services of a lawyer as well who wants to file in some documents in his defense, but we are yet to receive the papers.

Meanwhile the case has been adjourned to March 30, 2015 at the Multi-door Courthouse in Obalende, Lagos. In January 2015, D’banj kicked off his 10th year anniversary celebrations in Lagos when he successfully brought in American twerk queen Amber Rose to host the kick-off party in Lagos. In February he moved the party to South Africa where he was hosted at ‘Harlem’ and ‘Kong’ night clubs with a lot of celebrities in attendance. And just last week Thursday, February 27, 2015, D’banj headlined the Industry Night celebrations in Dubai as part of his 10th anniversary celebrations where he performed alongside Kenya’s Sauti Sol, Dubai’s G Mac and others….