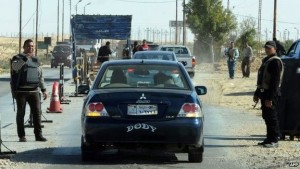 Bomb attacks which targeted the police and army in Egypt’s restive Sinai peninsula have killed two people and wounded not less than than 30 others, officials told the BBC:

A suicide bomber targeted a police compound in the city of El-Arish, leaving a civilian driver dead. A roadside bomb later exploded beside an armoured vehicle, killing a soldier. Sinai Province, a jihadist group affiliated to Islamic State, claimed it was behind the first attack, the al-Yawm al-Sabaa newspaper reported.

Militants based in the Sinai have killed hundreds of soldiers and police since the military overthrew Islamist President Mohammed Morsi in 2013.’ In the first attack, the suicide bomber drove a water tanker filled with explosives into the gate at the rear entrance to the police compound in El-Arish shortly after 06:00 (04:00 GMT), security officials said.

As the vehicle approached, police fired on it, detonating the explosives inside. The blast killed the bomber and a civilian worker at a nearby electricity company who had been driving by the compound. Interior ministry spokesman Hani Abdul Latif said the death toll could have been much higher had the bomber been able to enter the barracks.