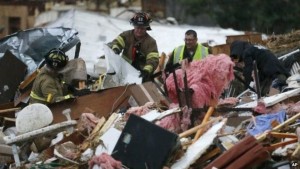 Not less than one person has been killed and several others injured after a tornado roared through Tulsa, in Oklahoma. BBC reports:

Tulsa police said the death occurred inside a mobile home park near suburban Sand Springs on Wednesday. The park was nearly destroyed in the storm. “It could have been much worse,” Sheriff’s Capt Billy McKinley said.

It was unclear whether the damage was caused by the tornado or just high winds. Mr McKinley said the exact number of people hurt was not known. Tornadoes were seen elsewhere in Oklahoma, as well as in Arkansas, but no injuries were reported from those.

Until Tuesday, when a waterspout formed over an Arkansas lake, the US had not had a tornado in more than a month, marking a slow start to the season. Typically more than 100 twisters are recorded in the US by this time each year, but as of last week only two dozen had been reported.