The spiritual leader of One Love Family, Sat Guru Maharaji has revealed who will win the forthcoming presidential election. 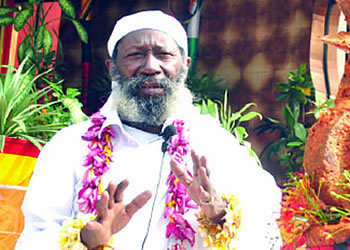 Dailypost reports that Guru Maharaji Ji, in a bid to forewarn the All Progressives Congress, has advised the party and its presidential candidate, General Muhammadu Buhari (rtd), to forget Nigeria’s presidency.

There is no vacancy for Buhari at Aso Rock,” he declared in a statement on Sunday. Guru Maharaj Ji continued by saying,  “President Goodluck Ebele Jonathan is the verifiable divine choice of the forthcoming presidential election. As the Living Perfect Master of creation in whose hands the fate of Nigerian project lies spiritually, I declare divinity’s decision to return Jonathan to Aso Rock over Muhammadu Buhari.


“I had publicly and sufficiently advised Buhari against nursing the ambition to rule Nigeria again. Superior forces are actually in-charge of the Federal Republic of Nigeria. I am at the helm of these great and unseen primordial powers of creation.

“My commitment to ensuring that Buhari and his fellow Anglo-American proxies do not deflect Nigeria off its path of gradual transition to authentic sovereignty, sustainable unity and real prosperity is sacrosanct. Nigeria is no longer to be ruled by feudal agents of Western neo-colonial power and Arab imperialists,”Guru added.

The spiritual leader called on all lovers of freedom, fairness and human dignity in Nigeria to vote for President Jonathan, saying, “He is an authentic component of Nigeria’s divinely graphed transition to greatness. His return to Aso Rock will further secure Nigeria from being re-enslaved by those who insist they were born to rule.”


Meanwhile, there has been various revelations concerning who will win the forthcoming presidential election between the Peoples Democratic Party’s Candidate, President Goodluck Jonathan (who is seeking for a re-election) and the APC’s Rtd. Gen. Muhammad Buhari.