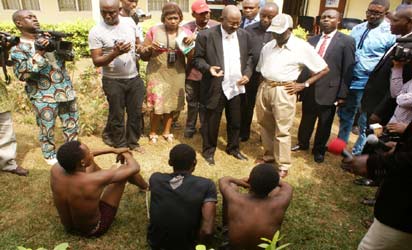 Personnel of the Department of State Security in Edo State have nabbed six men said to be involved in the kidnap of a former Local Government Chairman in the state, Anselm Adima.

The suspects were also said to be involved in the kidnap of a woman who was raped in the presence of her daughter, with the pictures of the act taken. The daughter who was also a victim of the kidnappers was not raped.

Another suspect was said to have been a fraudster who impersonated the Chief of Air Staff to hoodwink his unsuspecting victims.

Parading the suspects before Governor Adams Oshiomhole, Wednesday, Director of the state command of the State Security Service, Bello Bakori said, “this group of criminals here paraded are those involved in fraud, kidnapping, car snatching and robbery”.

He said: “the group was involved in the kidnapping of the former Transitional Committee Chairman of Esan North East Local Government Area, Mr. Anselm Adima where the sum of N3 million was paid as ransom.

“One of these boys is a notorious fraudster who goes about swindling members of the public and even impersonating the Chief of Air Staff. We have this one, Isaac Ogun collecting money from the public using the name of one Mr. Balogun and just recently, many cases have been established against him in Jos and other places and luckily he was arrested recently based on a complaint from the Airforce that someone is going about impersonating the Chief of Air Staff”.

The SSS Director further said, “Prince Nwanze, Osagie Oriarevbu, Oziegbe Akhimien, Kenneth Okosun, Ehizojie Okha were involved in the kidnapping and snatching of a car belonging to a woman who was kidnapped along with her daughter at Uromi. The victim was not only kidnapped but raped by the suspects and the car later sold in Jos”.

While commending the SSS for a job well done, Governor Oshiomhole said, “these people we see here are very normal human beings. When people tell you their experiences, you think that they are people made in hell and listening to them, it is also clear that it is all about greed.

“Some of them are students who want to live like the boss. They want to own cars, wear the most expensive clothes. So those are apparently what have lured them into this very unfortunate thing. I think each time we are able to apprehend criminals like these, at least the point is made that the culture of impunity, is stopped, they know that something can happen and something is happening.

“It may take time but as they say, time does not run against the state. Eventually nobody commits crime and goes scot free so my appeal to our young people is you cannot be too smart as to be able to run away from your own shadow. The more you run, the more the shadow will chase you and eventually it will catch up with you”.

He appreciated the Director, officers and men of the Command for the risk they have been taking in combating crime and ensuring peace and security in the state and assured the Command of the State Government’s continued support in the fight against crime in the state.