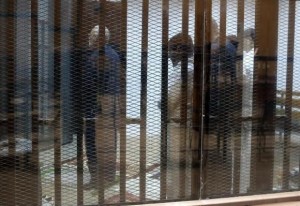 An Egyptian disciplinary court has ordered 41 judges into compulsory retirement on Saturday for their support in the outlawed Muslim Brotherhood, judicial sources said, the latest move in a sweeping crackdown on political dissent. Reuters report:

The government has implemented a harsh crackdown on Islamists as well as secular political opponents since then army chief Abdel Fattah al-Sisi ousted Islamist President Mohamed Mursi in July 2013 following mass protests against his rule.

The Disciplinary Council headed by judge Nabil Zaki did not immediately release the reason for its decision, but the judicial sources said 31 of the judges were sent into compulsory retirement for signing a statement that condemned the removal of Mursi.

Another 10 were removed from their posts for joining “Judges for Egypt” group which used to be supportive of the Brotherhood even before Mursi’s removal, the sources added.

Egyptian law prohibits judges from engaging in politics, but critics and human rights groups say the judicial disciplinary court has turned a blind eye to judges who openly support the government of Sisi, who was elected president last year.