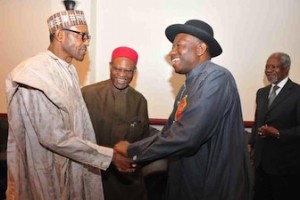 We have reported about a man who is likely to leave his wife for voting Goodluck Jonathan in the presidential election but we never saw a murder coming out of this election.

Lagos State Police Command has arrested a 26-year-old pregnant woman for allegedly stabbing her husband to death during a quarrel over who would emerge winner between the Peoples Democratic Party (PDP) and All Progressives Congress (APC) presidential candidates, while voting was ongoing at Ejigbo area of the state. The incident reportedly happened at the couple’s one room apartment at 81 Military zone junction.

Although accounts of the incident differ, one thing was consistent; the incident emanated from an argument over politics.

According to an account, while the husband decided to vote for the PDP, his wife, simply called Onyiyechi, voted for the APC in the presidential election. This was not a problem initially, until an argument over whose choice would win ensued. Onyiyechi allegedly stabbed her husband with a kitchen knife in the chest region, in the process.

“We were all outside waiting to vote when Onyiyechi rushed out, shouting for help. Out of curiosity, we all ran inside, only to discover blood all over the ground, on entering their apartment,” a neighbour told Vanguard.

“On closer observation, we noticed that the blood was from her husband chest region. We met him on the ground. Before we could rush him to the hospital, he gave up the ghost.

“Perhaps, he would have survived the attack had Onyiyechi called for help early. From all indication, it was clear that she attempted to manage the situation immediately the incident occurred. It was when she discovered that the situation had overwhelmed her that she raised alarm.

“I do not know the name of her husband. We only know that of his wife, who we fondly call Onyiyechi. The irony of this matter is that she is not cantankerous.

“She has never beaten a little child, let alone to fight with any neighbour. Again on that day, we saw both of them together. They were seen sitting outside, one hour before the incident occurred. Policemen from Ejigbo later came to remove the corpse to the Isolo morgue.”