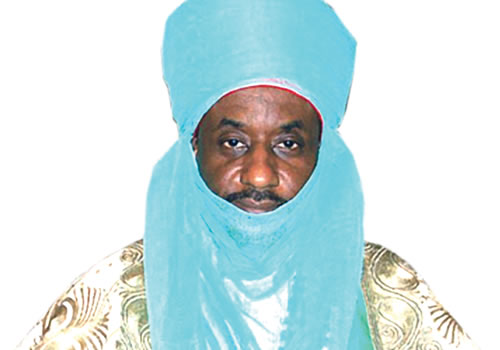 Immediate past Governor of the Central Bank of Nigeria now Emir of Kano, Lamido Sanusi, has said that the issues surrounding the alleged missing $20bn oil money have not been adequately addressed by the Federal Government.

Sanusi, who is now referred to as Muhammadu Sanusi II, had last year while at the helm of the CBN, alleged that the Nigerian National Petroleum Corporation, NNPC, had refused to remit about $20 billion to the Federation Account, a claim that earned him suspension from office.

However, following the dust raised by his allegation, the federal government hired an international audit firm, Pricewaterhousecoopers, to audit the account of the NNPC.

In its report submitted to President Goodluck Jonathan over a month ago, the PWC among other recommendations, asked the NNPC to remit $1.48bn to the Federation Account.

However, during an interview with CNN’s Christiane Amanpour on Wednesday, the emir insisted that the level of corruption in the oil sector was still high.

He said for instance, no one had accounted for the billions of dollars paid in kerosene subsidy, which was not appropriated by the National Assembly.

Sanusi added that Nigeria’s economic crisis caused by the crash in oil prices in the international market, the stock market crash and the devaluation of the naira, was all due to the mismanagement of oil funds.

He said, “My position in the Central Bank was that there was always this gap of $20bn after reconciliation between what the NNPC exported and what it deposited into the Federation Account. I raised a number of issues that I think have not yet been discussed and addressed sufficiently.

“One of them is the billions of dollars being paid in kerosene subsidies without appropriation by the National Assembly and against a presidential order and we don’t know who authorised those payments and yet no one has owned up to say ‘I authorised the payments, I made a mistake; it must stop!’ I think those issues need to be addressed and until we address them and begin to close all the loopholes in government revenues, we are going to continue to create opportunity for the destruction of the economy.

“It could be $20bn at the end of the day. After reconciliation it could amount to $14(bn) or $12(bn) and I think these issues reflect unconstitutional and illegal withholding of revenues from the Federation Account.

“The country is paying the price today; oil prices have crashed, the currency has been devalued, the stock market has collapsed, government revenues are in a very bad shape. Whoever wins, whether this government or the opposition, will have to deal with these issues. The petroleum sector is a major drain on the resources of the country and this has to be looked at”.

The monarch, who said the presidential candidate of the All Progressives Congress, Maj.-Gen Muhammadu Buhari (retd.), was right to say that corruption was killing Nigeria, added that Nigeria must stop living in denial on how deep corruption had eaten deep into the fabric of the nation.

Sanusi also praised the Nigerian military for its recent successes in the fight against terrorism, saying Boko Haram would have been eradicated if the anti-terror war had started a long time ago.

Reacting to a question about threats by Boko Haram to kill him, the emir said, “If I had a way of knowing that if Boko Haram took my life, they would stop killing people in Nigeria, I would give my life. I have nothing else to aspire to, I have achieved.

“I think the important thing is for every Muslim leader to speak up”.