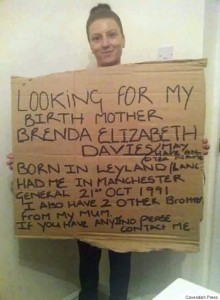 After living more than 20 years apart, a woman and her mother have been reunited — in part, due to the Internet, Facebook in particular. The Huffington Post reports:

U.K. native, Stacey Lee hadn’t seen her mother, Brenda Drake, since she was sent to live with her father and two brothers when she was 2 years old, according to a press release from Cavendish Press. For years, the now-23-year-old tried to find Drake but had no luck. At her boyfriend’s suggestion, Lee took a picture holding a poster she had made with her mother’s information on it, and shared it on Facebook, in hopes that the online community could help her.

“Looking for my birth mother Brenda Elizabeth Davies. (May have another name) Born in Leyland. Had me in Manchester General 21st Oct. 1991. I also have 2 other brothers from my mum. If you have anything please contact me.”

The 23-year-old’s post quickly caught the attention of people across Facebook, and was shared more than 100,000 times. Within a day, Kerianne Davies, a woman who claimed to be Lee’s cousin contacted her, and put her in touch with Drake.

Lee and her mother made plans, and in late February, the pair saw each other for the first time in about 21 years.