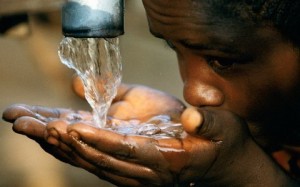 Residents of the Federal Capital Territory (FCT) will soon smile as the FCT water board has resolved to enhance service delivery, which will result in uninterrupted water supply.

This was contained in a statement signed by the PR Unit of the FCT Water Board.

According to the statement, chairman of the board of directors, Alhaji Alhassan Sule Gwagwa, said that already, the board has concluded arrangements to brief the Minister of the FCT, Sen. Bala Mohammed, on the need for the speedy completion of tanks one and six, as well as the associated mains in order to ensure that the adequate volume of water currently being produced is adequately distributed.

“Arising from the first meeting of the year, which is also the 10th since inauguration of board members, chairman of the board expatiated that aside conforming with President Goodluck Ebele Jonathan’s transformation agenda, the service expansion will also translate to improved revenue generation”, it stated.

It was learnt that board member in-charge of personnel matters, Alhaji Nasir Galadima, said that the board is making efforts at ensuring that all staff welfare, including incentives, allowances, provision of protective gears, uniforms and conducive office accommodation are also provided.

“The current security situation in the country has also necessitated the board of directors to ensure that the perimeter fence at the Lower Usuma Dam is intact and secure at all times, while all other complementary measures that will protect the entire facility against any form of hostility are also put in place”, it assured.