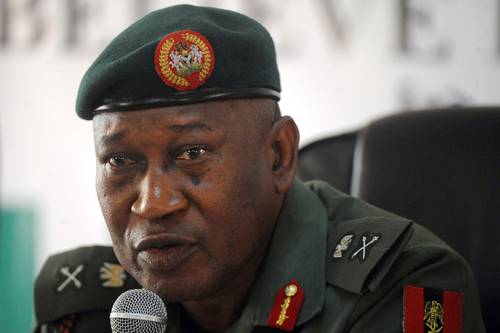 Buoyed by its recent wave of successes against Boko Haram, the Defence Headquarters Wednesday promised not to relent until every part of the country is finally rid of insurgency.

At a press conference in Abuja, the Director of Defence Information, Major General Chris Olukolade said “we are conscious that the fight is not over and the Nigerian military will therefore not relent. Nothing will be taken for granted. All Nigerians are equally enjoined to maintain this posture”.

He then urged Nigerians to “at all-times remain vigilant and conscious of our environment and be on the lookout for unrepentant terrorists, their collaborators or sympathizers who will stop at nothing in their resolve to destroy our country and civilisation”.

While commending Nigerians across every stratum for the recent show of solidarity with the military including the recent #MarchForOurTroops rallies in some parts of the country, Olukolade however, warned the media to be especially wary of cynics and saboteurs, who he said are generally unhappy that the war against terror was being won.

“However, while these support and show of love are being savoured, the attitude and activities of segments of the society who are still hell bent on undermining the morale of our fighting force by deliberately playing down the operational successes so far achieved remains very unfortunate indeed.

“In a bid to spitefully drown the efforts of our troops, this group of people have been mischievously and exaggeratingly reporting the supportive roles of foreign allies to the detriment of our operational success in the fight against terror.

“They go to every extent to ridicule, taunt or project every falsehood, purely to score some points in the clandestine sympathy for the terrorists. This unpatriotic posture is directly or indirectly undermining the esteemed status of Nigeria in the comity of nations”, he lamented.

According to him, “the current turn of the tide against the terrorists is an initiative conceived and is being driven by the Nigerian military but enjoying the backing of the reinvigorated MultiNational Joint Task Force (MNJTF), which has troops from Niger, Chad and Cameroon.

“The continuous aerial bombardment of identified terrorists’ cells and hideouts by the Nigerian Air Force and subsequent ground offensive by the Nigerian troops pursuing the dislodged terrorists is proving worthwhile.  Our partners are entrusted with employing the instrumentality of the Multi-National Joint Task Force to contain any terrorists who heads towards our borders with neighbouring countries and preventing the formation of any new safe haven elsewhere”.

While recognising the contributions of countries that make up the Multinational Joint Task Force (MJTF) in the counter-insurgency operations, Olukolade explained that their roles really have been much limited to their respective border areas by preventing Boko Haram elements to run into their countries while fleeing from Nigeria and also preventing the terrorists to maintain safe havens in those neighbouring countries.

“The forces have been working very hard in consonance with the terms and spirit of the Memorandum of Understanding that preceded this operation. They are effectively checkmating trans-border activities of the terrorists.

“There have been instances where these provisions for the operation of the MNJTF have afforded our partners the latitude required to pursue or beat back a retreating band of terrorists into Nigerian territory as was the case in Gamboru and other locations not far from the border”, he clarified.

“Unfortunately, some interest groups who seek to misinterpret this fruitful collaboration are seeking to drive a wedge between the Nigerian military and her supporting military formations or contingent by deliberately trying to denigrate and ridicule the effort of the Nigerian forces.

“If other militaries that have just joined the war against the terrorists would be described in some warped reports as ‘battle-hardened’, how would any sensible commentator or reporter describe the gallant Nigerian forces that have been battling these mercenary-ridden terrorists for over five years now say?”, he queried.

Despite the determination of some foreign media and their local collaborators to bring Nigerian military to disrepute however, the defense spokesman stressed that “the Nigerian military will not be distracted or detracted from the current momentum which is geared towards stamping out terrorism not only in Nigeria but in the entire sub-region”.

Olukolade then reiterated that whereas the Defence Headquarters values and appreciates the ongoing collaborative effort of the troop contributing nations of the MNJTF, “there has been no compromise of any aspect of Nigeria’s sovereignty or soil to any foreign force.

“This counter terrorist operation is comprehensively driven by Nigerian forces. Other members of the MNJTF have so far successfully denied the common enemy freedom of trans-border operations and this is in consonance with the idea of the multinational coalition initiated as far back as 1998”.