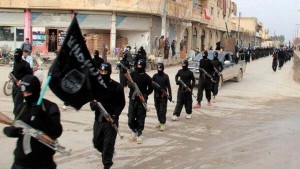 Islamic State militants operating in Libya seized a group of foreigners at the al-Ghani oilfield last week, a spokesman for the Austrian foreign ministry said citing “secure information” on Monday, he added that they were alive when taken. Reuters has more:

There has been no sign since of the nine oil workers from Austria, the Czech republic, Bangladesh, the Philippines and at least one African country who went missing, the spokesman said. “We know that they were not injured when they were transported away from the al-Ghani oilfield,” the spokesman said, adding Austria had information the group was taken by Islamic State militants.

Bangladesh on Monday confirmed one of its citizens was among the foreign workers taken hostage by Islamic State, calling the incident a kidnapping.

Foreigners have increasingly become targets in Libya’s turmoil, where two rival governments are battling for control and Islamist extremists have grown in the chaos that followed Muammar Gaddafi’s ouster four years ago.

The nine foreigners worked for oilfield management company Value Added Oilfield Services (VAOS). The company said it did not know which militia group was responsible for the incident and said it would not publish the names of its employees.