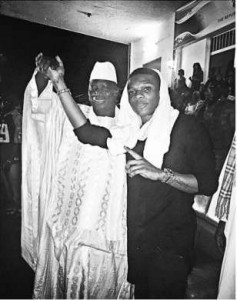 The Star Boy CEO has taken his game to a whole other level as he now hangs out with presidents.

The young singer, Wizkid is still on tour, capturing the hearts of civilians and Presidents as he goes along.

The Ojuelegba singer arrived in Gambia 5 days ago where he rendered a jaw dropping performance.

Wizkid was shown massive love in Gambia, so much so that he caught the attention of the President, Yayha Jammeh.

He shared a photo of himself holding hands with the President like as though they were old buddies. The iconic photo was captioned “With the President of The Gambia!! He loved the performance he wanted me to perform twice to the people!!! They loved it!! Love! “