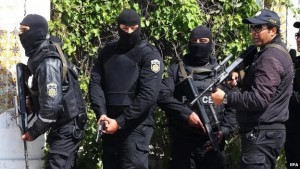 Nineteen people, including 17 foreign tourists, have been killed after some gunmen targeted a museum in the Tunisian capital, the Prime Minister says. BBC reports:

Italian, Spanish, Polish and German citizens were among those killed, as well as a Tunisian and a police officer, PM Habib Essid said. Security forces killed two gunmen and were searching for accomplices, he added.

The attack happened at the Bardo Museum in central Tunis. At the time of the attack deputies in the neighbouring parliamentary building were discussing anti-terrorism legislation. Parliament was evacuated following the attack. At least 22 tourists and two Tunisians were injured in the attack, Mr Essid said.

Live updates from the BBC “It is a critical moment in our history, and a defining moment for our future,” he said. “We have not established the identity of the two terrorists,” he said, adding: “Reports are not final, these two terrorists could have been assisted by two or three other operatives.”

Security operations were “still underway”, with forces “continuing to comb the area to find out the remaining operatives, if any”.