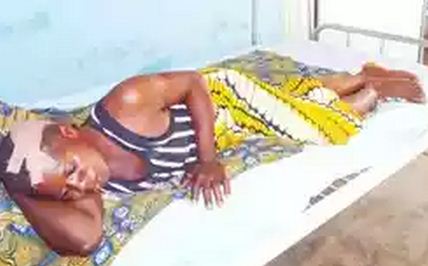 There was palpable tension last week at Kundu, an Abuja village in Kwali Area Council after an unidentified herdsman allegedly attacked a housewife, Mrs. Eunice Mathew, for resisting a rape attempt.
Locals told City News that the victim, who sustained major injuries, was rushed to a health centre after the incident.
The victim, while narrating the incident on her hospital bed at the community on Friday, said it happened around 2p.m. when she was returning from the farm.
The 28-year-old woman said she was carrying firewood on her head when a man accosted her, demanding to have sex with her but she refused.
According to her, the herdsman pushed away the firewood on her head and in the course of her struggle with him, he removed cutlass and stabbed her on the head.
Her words: “The man asked me to drop the firewood on my head, saying that he wanted to have sex with me but I refused. Before I realised what was happening, he pushed the firewood away and grabbed me. As I was struggling with him, he removed a cutlass and cut me on the head.’’
She said she became unconscious after the attack for about an hour before regaining her consciousness and trekked to the village with blood all over her body.
The victim said her husband took her to a health centre at the community.
The head of the community, Garba Bello, who confirmed the incident to our reporter, expressed concern over what he called incessant attacks on his people by unknown men.
He said when the victim’s husband reported the incident to him, he rushed to Kwali police divisional headquarters to lodge a complaint.
“Policemen from the division came to take the victim’s statement after the report,’’ he added.
The community head recalled how some herdsmen in the area invaded their farms and destroyed crops last year, adding that a farmer was attacked in the process.
The mobile line of the Kwali Divisional Police Officer (DPO), Mr. Philip Egueme, was switched off when City News called him but a police officer at the division confirmed the incident, saying the police were investigating the matter.